The Eight of Wands Tarot Card Meaning (including The Tarot Combinations)

What does The Eight of Wands Mean in a Tarot Reading?

The Eight of Wands is a powerful tarot card that signifies movement, speed, new beginnings, and possibly even news. If you're feeling stuck in a rut, this is the perfect card to pull to get some much-needed motivation. Read on to learn all about the meanings of the Eight of Wands tarot card!

​​That's the 'short answer'. For a more in-depth examination of what the Eight of Wands might mean to you, and any potential pitfalls, read on...
​ 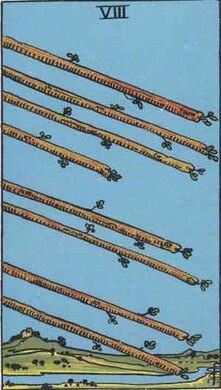 ​​
​The Eight of Wands Card Upright Meaning:
The number 8 in tarot stands for movement, speed and new beginnings. This is a very positive card that suggests that things are happening quickly and moving in your favour. When the 8 of Wands appears in a reading, it is a sign that you should take action on your goals and plans, as the universe is aligning to help you achieve them.
This is a card of progress, so if you have been working hard towards something, you can expect to see some results soon. It also indicates that now is the time to take any risks as they are likely to pay off. The 8 of Wands can also represent travel, so if you have been thinking about going on a trip, this may be the perfect time to do so.
This is generally a very positive card, but there are some situations where it can represent problems or delays. If you have been putting off taking action on something, the 8 of Wands may be telling you that it’s time to finally take that step. In some cases, this card can also indicate anxiety or restlessness if you are feeling like you are not moving forward fast enough.

​
The Eight of Wands Tarot Card Symbolism Explained:
The image on the Eight of Wands tarot card shows eight wands crossing in the air, creating a sense of movement and energy. The wands in this image are also pointing upwards, suggesting progress and development.
In a tarot reading, the appearance of the Eight of Wands suggests that things are about to change for the querent. This change can be positive or negative, depending on the context of the reading. However, regardless of whether the change is positive or negative, it is likely to be sudden and unexpected. The querent should be prepared for anything!

The Eight of Wands Tarot Meaning for Romance:
The Eight of Wands tarot is the card of movement, travel, and change. When upright, it indicates that romance is in the air. If you are single, start moving and meet new people. If you are in a relationship, things may be moving a little too fast for your comfort level. Make sure you are on the same page as your partner before making any big decisions.
This is not a good time to start a new relationship if you are looking for something long-term. The Eight of Wands suggests that there is someone out there who is interested in you, but they may not be ready for a committed relationship. Enjoy the attention, but don’t get your hopes up too high.


The Eight of Wands Tarot Meaning for Career:
The Eight of Wands suggests fast growth and forward momentum in your career. If you've been working towards a goal, this card indicates that you will soon see progress and achieve success. The eight wands also represent new opportunities and travel, so you may be offered a job in a different city or country. Alternatively, this card could suggest that you finally receive recognition for your hard work and receive a promotion or pay raise.


The Eight of Wands Tarot Meaning for Spirituality:
This card can represent the need for spiritual action or growth. If you have been feeling stuck in your current situation, the appearance of the Eight of Wands may be a sign that it is time to take some kind of spiritual leap forward. This could involve anything from exploring your religious beliefs to taking up a new spiritual practice.


The Eight of Wands Tarot Meaning as Feelings:
This is a time when things are moving in your favour and you can expect exciting new developments in your life. If you are not currently feeling particularly positive, the Eight of Wands suggests that you soon will be. This is a time of new beginnings and increased energy, so make the most of it!


The Eight of Wands Tarot - Yes or No?
If you are asking a yes or no question, the answer is generally yes. The eight of wands suggests that things are moving quickly and in your favour. You may be feeling a sense of impatience, but trust that things are happening as they should. Keep your focus on your goals and don’t get sidetracked. The eight of wands can also represent travel, so if you have been considering a trip, this may be the time to take action.

NEXT - THE NINE OF WANDS